skip to main | skip to sidebar

Congratulations to the OKC Gridiron Club for a great opening night performance tonight. The first act was national and the second act was state and local. The performances were terrific, the actors funny, the singing great, and the camaraderie of the cast and orchestra was enthusiastic.

Many of the politicians "roasted" in the dialogue were present tonight including Gov. Brad and First Lady Kim Henry, State Treasurer Scott Meacham, and State Superintendent Sandy Garrett.

Andrew Harris does a great imitation of Gov. Henry paired with Bart Vieugels as Scott Meacham.

John Greiner waas a believable Will Rogers and Kim Stem does a fancy impression of Mary Fallin.

Proceeds from the show support scholarships for journalism students.

For tickets check out the website at http://www.okcgridiron.org/current.htm.
Posted by ODP Chairman at 11:19 PM 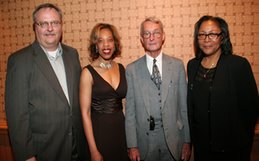